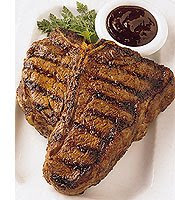 Today is my own self-proclaimed holiday, which I like to call "Meatful Friday."

My reasoning is this: Next Wednesday is Ash Wednesday, the start of the Lenten season. With the "advent" of Lent comes the Fridays of abstinence from meat. This means that today, February 16, the last Friday before Lent begins, is the final Friday on which you can partake of mammal flesh until Friday, April 13, the Friday after Easter Sunday. Get it? Aren't you craving some sirloin already? Bacon, egg, and cheese omelet, anyone?
Today's Gospel gave us Jesus' requirements for discipleship: "Whoever wishes to come after me must deny himself, take up his cross, and follow me." We're not good at self-denial. Truth be told, we are the self-gratification, self-soothing, self-appeasing society. We want what we want, when we want it, and we don't like being told, "no."

The truth is that I'm not really craving any meat right at this moment. Today isn't a "no meat" day and so what's missing from my life is the little voice that repeats over and over, "You can't have it." At my first parish assignment, the pastor and I would visit the local hospital once a week (he'd visit on Mondays and I'd go up there on Fridays). If you drove to the hospital a certain way, the way he showed me on my "orientation tour" of the area and the only way I knew at the time, you passed the town square of Morristown, New Jersey, which had (and still has) these two hot dog vendors parked alongside the square. Now I'd been assigned there since June of 1998, so I had passed these trucks on a bunch of previous Fridays (usually the Starbucks was

more of a tempting lure than the hot dog wagons) without the desire to partake of some "Sabrett ecstasy". But come that first Friday of Lent, 1999, driving past those hot dog stands was like something out of "Saving Private Ryan"! I was being ambushed! The bottom line: I learned to get to the hospital using an alternate way until after Easter. The voices were just too much, and I'd developed a soft spot for pushcart hot dogs ever since the two summers I spent working a pushcart back in 1985 and 1986.

But is denying ourselves really so outrageous? If our high school reunion is coming up, don't we starve ourselves to lose some of the weight we've gained since we were 18? Don't we glorify and point out as role models the athletes who trained for thousands of hours and missed out on some childhood fun because they were determined to make it to the Olympics or professional sports? Yeah, we can do it, but do we want to do it?

I may have made too broad of a statement before, because there are still some Catholics out there (usually older ones) who still follow the old tradition and regularly abstain from meat every Friday

. They know that the rule was relaxed in the U.S. back in 1966, but by then it had already become a habit in their lives. In other words, eating meat on a Friday doesn't "feel" right, so they choose not to. Fair enough, and fodder for the rest of us: Imagine if prayer was such a part of our everyday life that not doing it would cause a feeling within us that "something's missing"? If nothing else, a day on which we deny ourselves something gives us the chance to appreciate the times when we were able to have it.