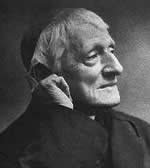 Though this comes from John Henry Newman (1801-1890), it is technically not an Advent sermon, and so I didn't put "Newman on Advent" in the title. It is part of an anthology of Cardinal Newman's writings (he was created a Cardinal by Pope Leo XIII in 1879) called Selected Sermons, Prayers, and Devotions. In this day and age when homilies have become comedy routines, peppered with jokes and stories in an attempt to hold the ever-diminishing attention span of the pew-dweller, sermons like these are unthinkable at your average Sunday Mass at Saint Philintheblank's! This is from a sermon on the Incarnation of Christ:

"Let us, then, according to the light given us, praise and bless Him in the Church below, whom Angels in heaven see and adore. ... He came in lowliness and want; born amid the tumults of a mixed and busy multitude, cast aside into the outhouse of a crowded inn, laid to His first rest among the brute cattle. ... Great is our Lord, and great is His power, Jesus the Son of God and Son of Man. Ten thousand times more dazzling bright than the highest Archangel, is our Lord and Christ."
Posted by Father Jay Toborowsky at 12/06/2006