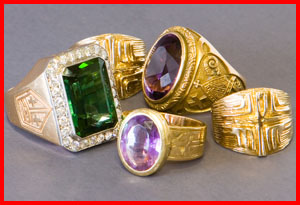 The rings above are episopal rings from the archives of the Archdiocese of Boston; rings that were worn, at one time or another, by Boston's Archbishops. The pic came from the blog of Boston's current Archbishop, Sean Cardinal O'Malley.

If you haven't seen it, Cardinal O'Malley's blog is called (brace yourself for the shock) cardinalseansblog. He was, as best as anyone can tell, the first member of the College of Cardinals to dive into the deep end of the New Evangelization and make use of the means of communication (blogs and Podcasts, for example) that are common today. Though it seems to be catching: The Archbishop of Sydney, George Cardinal Pell, has made his Christmas message available for downloading at the website for the Archdiocese of Sydney.

Anyway, while we're on rings, Cardinal O'Malley's blog the other day had some great close-ups of other rings: 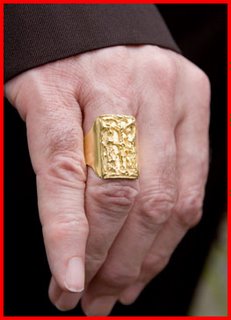 This is the ring given to Cardinal O'Malley (and all the new Cardinals) by Pope Benedict XVI at the Consistory last March. 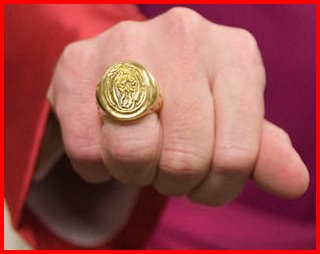 This is the ring worn by one of the recently ordained auxiliary bishops of Boston. They were ordained on the feast of Our Lady of Guadalupe, and so Cardinal O'Malley had their episcopal rings made with the Guadalupe image on the front.