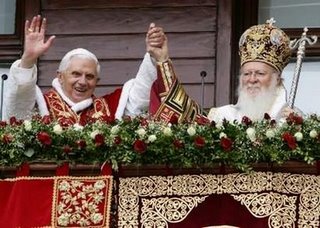 I apologize for being so silent on Pope Benedict's trip to Turkey. I had every good intention of watching the events as they were covered on EWTN, and then downloading the transcripts of the homilies and speeches in order to come up with something to say about the trip. Unfortunately, that just didn't happen.

But thanks to the blogosphere, some people did put very fine words to paper (well, to computer screen actually), and this is one of them.

Father Z has a blog called "What Does The Prayer Really Say" in which, besides commentary, he shows the literal translations of the prayers at Mass as they are written in the official Latin (and how the English translations of the 1970s fall pathetically short). He has made some very worthwhile points in his commentary on the address of Ecumenical Patriarch Bartholomew of Constantinople at the end of the Divine Liturgy which Pope Benedict attended. Check out Fr. Z's commentary and see if the photo above gives us a hint as to who has become the most unlikely of co-conspirators in Papa Ratzinger's reform of the Roman Liturgy.
Posted by Father Jay Toborowsky at 12/02/2006