Free Will and the Immaculate Conception

In a talk I recently gave to catechists for an Advent Mini-Retreat, I made use of a 1995 talk given by Pope Benedict at a Marian Congress. His talk was a reflection on the line in the Nicene Creed, "By the power of the Holy Spirit He was born of the Virgin Mary, and became Man". It's a line we recite every week (as well as Holy Days of Obligation, such as today), but can get lost as we go on 'auto pilot' when reciting things we've committed to memory. This talk is one of 13 essays, homilies, and other stuff found in God is Near Us, published by Ignatius Press about 3 years ago.

In the "meat" of his address, Papa Ratzinger examines 3 passages from Scripture to see how they defend what we say in the Creed: The "annunciation" of God's plan to St. Joseph (found in Matthew 1:18-25), the prologue of John's Gospel (specifically how Jn1:14 "The Word was made flesh", blossoms in Jn 6:51 "The bread which I shall give for the life of the world is my flesh"), and Luke's account of the Annunciation (1:26-38). In that last reflection, he says this:

"Without the freely given assent of Mary, God cannot become man. Certainly, this 'Yes' Mary says is wholly by grace. The dogma of the Immaculate Conception of Mary, whereby she was freed from original sin, has in fact just exactly this as its sole significance: that no human being can set in motion the process of salvation by his own powers alone, but that his 'Yes' is wrapped around and supported within by that divine love which comes first and before all else and that already surrounds man before he is even born. 'All is grace.' Yet grace does not remove freedom; rather, it brings it into being. The entire mystery of redemption is present in this story and is summed up in the figure of the Virgin Mary: 'Behold, I am the handmaid of the Lord; let it be to me according to your word' (Lk 1:38)." 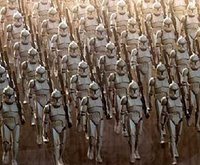 God created each of us with free will. He could've created a 'clone army' who would've followed his orders perfectly and completely, but he didn't. He freely chose to create us in His image and likeness, and in doing so went beyond physical likeness to ontological likeness. He gave us human beings the ability to freely choose.

This gift of free will trickles down into all aspects of our life as Christians, especially in the Sacramental life of the Church: Every reception of a Sacrament requires some level of questioning on the part of the Church and acceptance on the part of receiver (eg - the couple giving their free consent at a marriage, parents being asked if they understand their newfound obligations when they ask to have their child baptized, even the "amen" at Holy Communion is the acceptance of the Church's teaching that the Communion Host about to be consumed is truly the Body of Christ). At every one of those moments we exercise our free will as given to us by God.

r than the perfectly-obeying clone army which certainly would have been easier for Him to manage, God has a bunch of "Mini Mes" on his hands: still in "His image and likeness", but seemingly always out to "get Him"! Put yourself into that dilemma: You like freshly squeezed orange juice so you go out and buy a juice machine, but when you get it home you find out the machine can't make orange juice. What would you do? You'd start all over and get a new machine, right? The amazing thing is that, even though salvation history is full of times when God said to do one thing and his people did another, He never created a "Humanity 2.0", without the burden of free will which we seemed to have such a problem with. Our Lady, born without the stain of Original Sin, could see things with a sharper perspective than we who were born with it. What it means is that Mary's big 'Yes' was given with an understanding of the past, present, and future that we have to continually struggle to achieve when we give our little "yesses" to God. Every day (several times a day, in fact) we have to reassert that "yes" to God, because (as many of us know so well), our "yes" in one moment can become a "no" in an embarrassingly, painfully short amount of time. Thank God, though, that he never gives up; never stops asking for our "yes". More than that, thank God that He goes so far as to tip the scales in our favor by giving us the advantage of Confession and the Eucharist, so that we can have at our disposal (albeit temporarily) what Mary had going for her (the Eucharist allows us to have Christ dwell within us and Confession removes sin and restores us to communion with God).

Think of THAT next time that line in the Creed comes around!
Posted by Father Jay Toborowsky at 12/08/2006