Today's feast of Sts. Cosmas & Damian brought to mind (besides the thought to use the 1st Eucharistic Prayer at Mass) the Basilica bearing their names in Rome, located in the shadow of the Colosseum. Since 1998, it has been the titular church of Giovanni Cardinal Cheli, the retired President of the Vatican's Council for the Pastoral Care of Migrants.

EXTRA CREDIT: When Cardinal Cheli was named to the Sacred College in '98, he was named a Cardinal Deacon, and (as Canon Law permits) after ten years, he petitioned the Holy Father, and was raised to the level of Cardinal Priest in 2008. He turns 91 this coming October 4.

This Basilica was the first to be converted into a church by using two buildings of the Roman Forum in 527 by Pope St. Felix IV. Originally, one would enter the church from the Forum itself. Now one enters from the main street: the Via dei Fori Imperiali.
Here are some pictures I found on the internet: 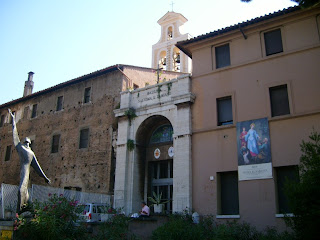 The Basilica's entrance, with the coats of arms of Pope Benedict and Cardinal Cheli under the arch and above the doors. 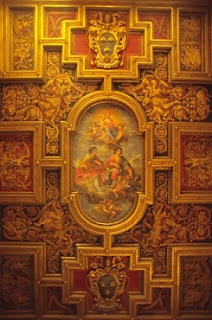 The ceiling of the Basilica has a fresco of Sts. Cosmas & Damian being welcomed into Heaven by the Virgin & Child. The coat of arms of Pope Urban IV is featured in lots of places in the Basilica: It was during his pontificate (1623-1644) that a major renovation took place. Pope Urban was a member of the Barberini family, and so the Barberini bees can be found all over the place. 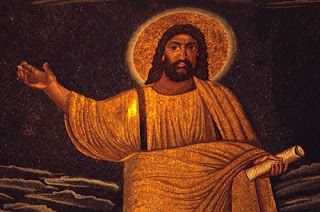 The apse mosaic in the Basilica is one of the oldest (from the 5th century), and most famous in Rome; one which artists through the centuries modeled their apse designs upon in churches throughout the city. The photograph above is the depiction of Christ in center of the mosaic. Dressed in a Roman toga of gold, he stands out from the background of the blue nighttime sky and purple clouds. In his left hand is a scroll, giving him the classic pose of a Greek orator. 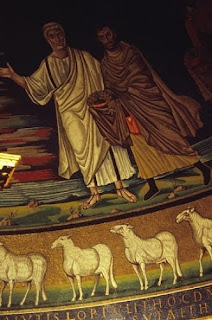 St. Peter is escorting St. Cosmas (or maybe St. Damian) towards Christ (though not in the picture, to the left of Christ, St. Paul escorts the other brother). St. Peter is in the white robes of heaven, while St. whichever is in red and violet robes, carrying the crown of martyrdom in his hands. The artist depicts both Cosmas and Damian in matching robes and with near identical features, emphasizing they were, in fact, blood brothers. The sheep underneath are part of a herd of 12 sheep (representing the apostles), facing the Lamb of God in the center. Where is artwork like this in churches today?
Posted by Father Jay Toborowsky at 9/26/2009