I was driving around on my day off about two weeks ago, listening to Archbishop Dolan's radio show on Sirius/XM's Catholic Channel. He was asked the question, what was his favorite piece of religious art? He responded with the above painting: Caravaggio's "The Calling of Saint Matthew", painted around 1600.
It can be found in the Rome's Church of San Luigi dei Francesi because a French Cardinal, Matthieu Cointerel, desired to be buried in a side chapel there, and left money for the decoration of the chapel (which he wanted to reflect his patron, St. Matthew). The Cardinal died in 1585 without any work having been done to the chapel in the way of adornment. Another artist received the commission to do the paintings first, but he dragged his feet too long and was booted off of the job. In 1599, Caravaggio received the commission for the chapel. The painting is one of three done by Caravaggio for the chapel (the others being Matthew's martyrdom and St. Matthew with an angel), but the "Calling" is the most well known. All three paintings were done by 1602. 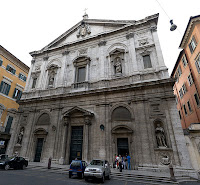 San' Luigi dei Francesi was established as the church for French nationals living in Rome (In fact, the Cardinal titular of this church has traditionally been the Archbishop of Paris), and is passed by most people on their way either from the Piazza Navona to the Pantheon, or vice versa. There's actually a nice supermarket around the corner from it, which is a great place to buy snacks and drinks for yourself (and those Baci chocolates for friends back home ) cheaper than snack bars sell them to tourists.
On St. Matthew's feast day, it seemed appropriate to post this on the blogosphere.
Posted by Father Jay Toborowsky at 9/21/2009

Father Jay, We love your homilies at daily Mass. They are both spiritually inspiring and informative.
You are a gift to St. Lawrence's Parish

Hey! They have that painting outside the refectory where i'm at!