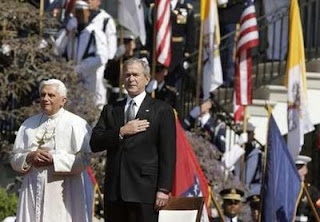 Those of you who watched the welcome ceremony at the White House heard the national anthem of the Vatican City-State.
Composed by Charles Gounod as a "march" for the 50th anniversary of the Priestly ordination of Pope Pius IX, it was played for the first time on April 11, 1869, by a combination of seven military bands.  It was played in the presence of Pope Pius XII in a Christmas ceremony marking the start of the 1950 Holy Year, and it was Pius who then decided that Gounod's work should be adopted as the Papal Hymn (anthem) of the Vatican City-State.
While we heard the tune on the South Lawn today, here are the words:
O happy Rome, O noble Rome:
Seat of Peter, whose blood was shed in Rome,
Peter, to whom the keys of the kingdom of heaven were given.
Posted by Father Jay Toborowsky at 4/16/2008