Besides that, Mrs. Lincoln, how was the play? 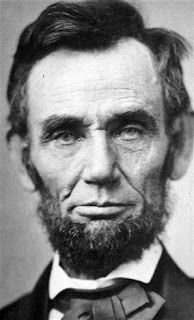 Today is the 143rd anniversary of the assassination of President Lincoln, who was killed at Ford's Theater back in 1865.
The Presidency and Presidential history have always been of interest to me.  I've always had an interest in Abraham Lincoln, going back to a paperback book that came out when I was young called "The Lincoln Conspiracy" (which questioned whether US government officials had anything to do with Lincoln's death).
In recent years, though, thanks to a friend whose parish is in southern Maryland, I've been able to visit some of the sites which were part of the history of the Lincoln assassination.
The first thing I've come to learn was that most of the people associated with the events were Catholics.  Dr. Mudd, Mrs. Surratt and her son John, David Herold, etc.  Not that their Catholicity had anything to do with it, it was just something I noticed.  John Surratt, in fact, in his escape from prosecution in the United States, actually spent time in service to the Papal Zouaves (infantrymen who defended the Papal States).  Later on, after his discovery and extradition to the United States, and after a trial jury deadlock gained him freedom, he became a schoolteacher where?  St. Joseph's School in Emmitsburg, Maryland (the town is also home to a great seminary). 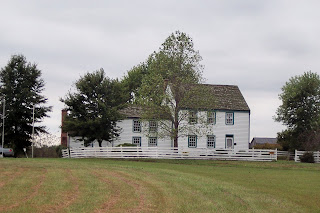 A picture I took of Dr. Mudd's house
where Booth's broken leg was treated. 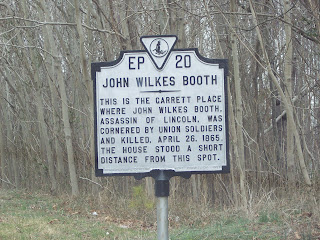 The site where Booth was discovered and killed,
a barn owned by Richard Garrett, is now an
empty clearing on the median for VA route 301.
(I came across the site returning from North Carolina,
and I should probably take this opportunity to apologize
to the car behind me for stopping so suddenly.  Whoops, sorry)
Finally, since this is a blog with religious overtones, I'll leave you with a link to an interesting article called, Lincoln and the Will of God, which was published in First Things back in March.  The author, Andrew Ferguson, explores the faith and religious beliefs of Abraham Lincoln.
Posted by Father Jay Toborowsky at 4/14/2008

This little nugget is mind-blowing.
This would appear to be statistically impossible -- or, to put it another way, improbable. Very curious.