Once upon a time, there was a Pope who really doesn't get to pack his own bags anymore. He doesn't really want to bother anybody or make a big fuss, so he just wears whatever vestment they put out for him when he goes out of town. 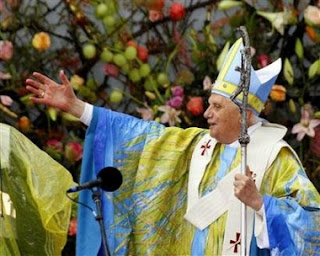 Some complain that what he wears is just "too left". 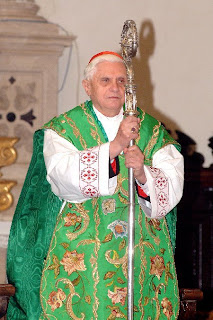 While others complain that what he wears is just "too right". 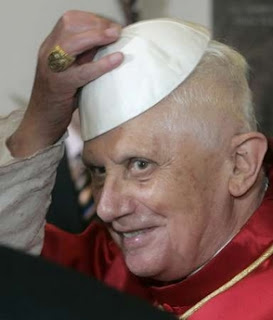 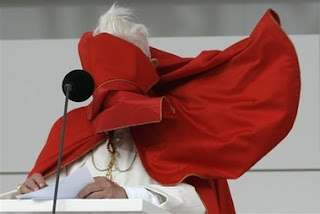 And then there are times when the clothes just won't cooperate at all! 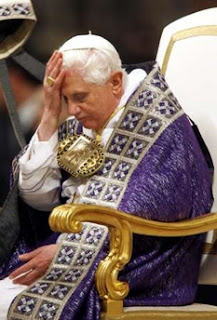 Poor Heiliger Vater, all this vestment criticism can give a guy a headache!
(photos by AP, Reuters, and the internet)
Posted by Father Jay Toborowsky at 9/09/2007

If you are a genuine fogey you should learn the correct usage of "there is (there's)" and "there are".

Hey, pal, my blog = my decision as to what constitutes a young fogey. But lest the grammar police pull me over, I'll make the correction.

Don't ya just love him! The Holy Father I mean, not you Fr Toborowsky! lol

I have finally worked out how to post on your blog. I go to another blog which allows me to get yet another Google account and then quickly come here while my name is active!

Sometimes I think that the Mgr-in-charge-of-Papal-liturgy is BEGGING for a change of assignment.

Did you ever notice that, while the Holy Father's vestments look perhaps goofy (is that blue tie-dye?) or uncooperative (the flying cape strikes again), he never does? No matter what the situation, our Holy Father maintains both his dignity and his sense of humor. With a father like that, no wonder we are proud to be Catholics! (In the non- seven deadly sins way, of course.)