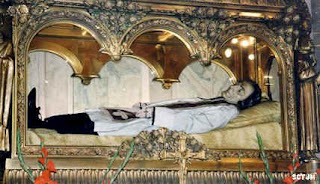 While most of Pere Vianney's exploits are legendary (battles with the devil, the conversion of the village of Ars), some others are not so lofty. Take, for example, the well known fact that St. John lived on potatoes. Heck, french fries, tater tots, hash browns, and Wise Potato Chips have been a staple of my diet for years!

Also, St. John Vianney is best known, perhaps along with St. Pio of Pietrelcina, as "saints of the confessional". It was said that Vianney spent between 16 and 18 hours a day hearing the confessions of an unending line of Catholics who came to pour out their sins to him. That may have been his first miracle; not the hours spent in the confessional, but the fact that there were that many Catholics who actually wanted to go to confession!

Fr. Dwight has a post up dealing with confession as well. I posted a comment there about the indifferent quality of confessors I've been to and asking how to go about locating a good one. Any thoughts?

Of course his one potato a day diet resulted in severe malnutrition resulting in some of his teeth falling out.

Fr. George Rutler's biography on St. John Vianney is a great book on this great saint.

A more subtle detail of 16/18 hours in the confessional is his ability to actually DO that.

That this saint could be in there for so long? That is a true testament to abundant graces given to him!

St John Vianney and St. Padre Pio are my two favourite saints. I love the humility and poverty of the Cure of Ars. He is the ideal choice to be patron saint of parish priests. What a role model!

One day I noticed my parish's parochial vicar as he left the confessional. The poor man looked exhausted and shaken. He usually stops to pray after confessions but this day he prayed longer than usual. God bless our priests. They get to hear some really horrible stuff in the confessional.