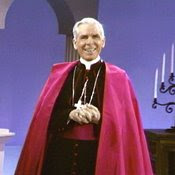 "Now that Christ is in glory at the right hand of the Father, what does he do there? Has he a work? Certainly: he's a mediator. We might almost say that he's constantly showing his scars to his heavenly Father and he is saying, 'See these, I was wounded in the house of those who love me. I love men. I suffered for them. Forgive them heavenly Father.' He is our sacrifice. He is ever present before the Father. As scripture puts it, 'Ever making intercession for us.'

You see, we often get a wrong understanding of the life of our Lord. We think of him as just living on this earth, preaching the Beatitudes and suffering. No, Jesus did not come down just for that. He is living, making intercession for us, the representative of all who invoke him. Certainly he has finished the work of justice on earth because he paid the debt of sin. But the work of mercy in heaven is unfinished. That goes on and on. The reason it goes on is because we need his intercession."