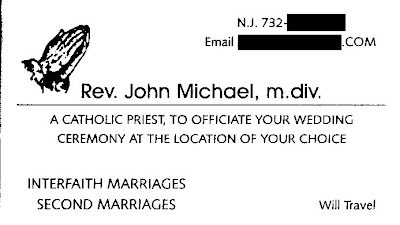 I've had this business card staring at me next to my computer for some time now. A few months ago I was asked to perform a wedding ceremony at a non-denominational chapel on a college campus in my diocese. On the day of the wedding I went into the chapel's sacristy in order to find matches to light some candles. As I opened up a desk drawer, I found a stack of cards like you see above. Ladies and gentlemen, welcome to the world of "Rent-a-Priests".

Rent-a-Priests are, almost always, Roman Catholic Priests who have left the Priesthood on not-so-good terms. They hold to the argument that, since their ordination was validly done and the Church teaches that Holy Orders is a Sacrament that confers a permanent ontological change on the ordained, they are still able to celebrate the Sacraments. What they're not saying is that, besides possessing valid ordination, a Priest must also have the permission of the local Bishop (technically called "faculties") to perform those Sacraments in a diocese. In laymen's terms, look at it like this: It is not enough that your doctor graduated medical school having passed all of the classes; in order to practice medicine he/she needs to be licensed by a higher authority and have been granted privileges by a local hospital to practice medicine and treat patients. Or, in the case of a lawyer, it is not enough to have gone through law school; they need to pass the Bar Exam of the state in which they intend to practice law before they can represent any clients in that geographic territory. In short, the education is not enough; what is also needed is a licensing or sanctioning by a higher authority. In that case, it is the same for Catholic clergy (except the Cardinals of the world and the Pope, who have universal faculties according to Canon law).

Spring is upon us and this is the season for weddings. It's one thing to find a loose business card somewhere in a chapel that hosts hundreds of weddings a year. It's another thing to find a stack of these business cards, presumably to be handed out to anyone wanting the "look" of a Catholic wedding without the inquiry into past marriage(s) or marriage preparation. Ultimately, while a wedding ceremony from a "rental" may fool grandma, it doesn't fool God. Neither does it fool the Church, because it is not recorded in the wedding register of any Catholic Church. If you know someone who has had such a wedding, have them make an appointment with their local parish priest to see what can be done about reconciling any previous marriage(s) and a convalidation of the current marriage.
Posted by Father Jay Toborowsky at 5/27/2007