Do The Headphones Cost 3 Dollars, Anyway?

As Pope Benedict makes his way to Brazil, John Allen has a story today about what life is like when you're travelling on the Pope's plane. The Vatican City-State, of course, owns no aircrafts. The Italian government provides a military helicopter for the Pope when he travels in Italy (much like, during his stays in the U.S., our government provided Pope John Paul with travel in one of the Marine helicopters we typically associate with Presidential travel). For overseas travel, Alitalia provides a jet. For his return trip home, an airline native to the host country usually gives him a lift. I've heard apocryphal stories for years that TWA Airlines has a museum somewhere which exhibits the furniture it placed on a plane whenever they flew JP2 home from America. But with TWA out of business, I'm not sure if the museum still exists. 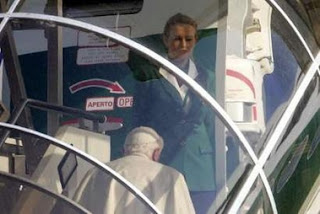 The American media, assuming that the President's plane has a name, so therefore the Pope's plane must have one as well, has used the term "Shepherd One" from time to time. This is a US media invention, and not something official at all. But once, seven years ago, I was amazed to see how the name had "staying power". In 2000, I was in the airport in St. Louis waiting for a TWA flight and looking out the window by our gate. As I looked down I was shocked to see a plane towing contraption with "SHEPHERD 1" stenciled on it. Pope John Paul had visited St. Louis on the way home from Mexico in 1999, and I guess that was the designated towing thingee (notice my mastery of technical airport lingo) for the papal aircraft. 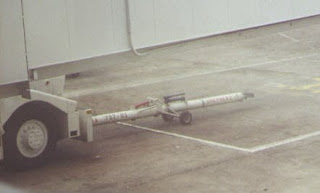 So, of course, being the good Young Fogey I am, I took a picture of it. It's a bit blurry, but look at the tip of the towbar.
Posted by Father Jay Toborowsky at 5/09/2007