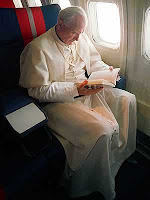 In a previous blog entry, I mentioned that I had heard apocryphal stories about the display of furniture used on past TWA flights which carried Popes (and Servants of God) Paul VI and John Paul II. Well, thanks to a Young Fogeys blog reader, I've received confirmation about that.

The reader, a former TWA employee, tells me that anyone can view the papal cabin appointments during normal business hours in the lobby of the American Airlines Training Center adjacent to the Lambert/St. Louis International Airport (I'm told there's also a gift shop for "all things AA/TWA" in the basement). In addition, if you're near the Dallas/Ft. Worth airport, photos of the papal plane arrangement can be seen in the C.R. Smith Museum.

Finally, he gave me a link to a small promotional video produced by TWA that mentions flying the past pontiffs. Once you're on the site, click the links for "multimedia", then "video", then "promotional" to get to the video entitled, "TWA Airline to the Stars".
Posted by Father Jay Toborowsky at 5/18/2007