Tough Words to Swallow from St. John of Capistrano 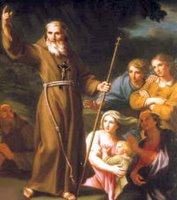 Today's Feast of St. John Capistrano has a real "wake up call" to clergy contained in the bit of his writings found in today's Liturgy of the Hours:

"Truly the unclean, immoral cleric is trampled underfoot like worthless manure. He is saturated with the filth of vice and entangled in the chains of sin. In this condition he must be considered worthless to both himself and to others."

Don't hold back, Johnny, tell us how you really feel.

Yesterday's Gospel told the story of Sts. James and John asking Jesus for the prized seats of the heavenly banquet (as well as any banquet in the customs of Jesus' time): They wanted the seats right next to the host of the party. They weren't happy being part of the 12. Heck, they weren't content being part of the "big 3" (along with Peter) that got to be called into the big events in the Gospels. In the days before the "Survivor" TV series, this may have been the first "alliance formed to vote someone out."

As Halloween approaches, many children (and not a few adults) choose costumes to wear. If you're around them (or if you're one of them), watch the difference between the age groups: adults put on the Superman costume, but know they can't jump off a roof. Children put on their costume and "become" that character, not just in outside appearence, but in their minds, too. We can all put rosaries on our rear-view mirrors and scapulars around our necks when we're going on an airplane, but that doesn't "make" us Catholic. A Roman Collar, in itself, doesn't make the Priest holy or give him the power to absolve sins or say Mass any more than a wedding ring has the power to repel infidelity or generate children. If heaven is the big game, then holiness is our ticket of admission.

Of course, the seats of honor don't really matter at the heavenly banquet. We should strive our best to simply get into the party. St. Paul is fond of using the analogy of athletes in the Christian's race of life. In a way, though, it's inaccurate. A race means there's winners and losers. In heaven there will be no giant clock telling us who got there ahead of us. Nor will there be special giveaways only to the first 10,000 into the park. There'll be no, "Sorry, just ran out of supreme and definite happiness in communion of life and love with the Trinity, with the Virgin Mary, the angels and all the blessed (see the Catechism 1023-26). Should've gotten here sooner." Each of us are called to run the race at the pace God gave us, according to the state of life we're in. A mom can't run so fast because she was up the night before with her sick child. The priest was going to run the race, but got called to an emergency at the hospital. The person with Parkinson's can only move in very small steps. The point, contrary to what the world preaches, is not to get there ahead (or at the expense) of others; it's simply to "get there."

Just, if you do get there, stay away from Capistrano until he gets used to you.