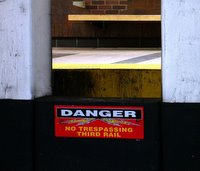 For those who use rail transportation, you know what it is: The "third rail" is the means by which electricity is supplied to the railcars. For those in political circles (something I did for a few years), "third rail" is a codeword for a topic so controversial that you stay away from it at all costs. Why? Quite simply, "you touch it, you die."

This morning's first reading at Mass was Ephesians 5:21-33, which includes all the talk about wives being subordinate to their husbands, the husband being the head of the wife, etc. Most Priests and Deacons treat this passage like the third rail; they either omit it altogether, or they tell people this wasn't what St. Paul really meant, and then they preach on something else to try to diffuse the situation. Lectionarys conveniently provide a "shorter version" of the reading, omitting the nitroglycerin-like passages. A few years ago the Irish Bishops "took the bullet" for their clergy, declared a bunch of these passages as "undesirably negative" and ruled that they should be outright removed from the cycle of readings (in their version, husbands must still "love their wives as Christ loves the Church", but wives don't reciprocate). Some other people choose to use the passage as the poster child for all that is wrong with this "male-dominated, female-excluding" Church. Once in a while I like to live dangerously, so let me see if I can explain the passage in its greater context.

DISCLAIMER: Reading the scriptures out of context is almost always an invitation to disaster. In Dr. Michael Waldstein's new translation of Pope John Paul's "Theology of theBody", it takes JP2 fifty pages (pgs. 465-515) and thirteen separate Wednesday Audience addresses to dissect this passage! What that means is that you shouldn't look for anything comparably "profound" in these few paragraphs that follow. That being said, buckle yourself in and enjoy the ride...

The New Testament has 3 separate passages which explain just how Christianity should be lived out, each bringing up that nasty topic of "submission" in the context of Christ's 3 offices as Priest, Prophet, and King; something each of us were made sharers of at our Baptism (see the Catechism, par. 1241):

Why does "submission" keep coming up? Because in living in a spirit of submission, Christians reflect Jesus Christ. Through Baptism, we were all baptized into the death of Jesus, which was Christ being submissive to the will of His Father (Catechism, par. 1227). Simply put, Jesus' mission in this world subsisted within (or we can say, was "submissive" to) God the Father's mission to reconcile humanity to Himself following Adam & Eve's messup in the garden. Married couples imitate this by being submissive to each other. The husband, representing Christ, is asked to submit to his wife first. The wife, representing the Church, then responds with submission to her husband. Some critics argue that St. Paul was only reflecting the 'male-supremacist' culture of his day, but the truth is that the culture of the day said that only the wife needed to be submissive. In Ephesians, St. Paul is counter-cultural!

So how should we read Ephesians 5? Pope John Paul says that to understand what St. Paul means in this oft-maligned passage, we've got to re-read the letter from the start. In Ephesians 1:1-10, we find out that before the world even began, God chose us in Christ to be holy and blameless (verse 4). In other words, we (male & female) have always been part of the Divine Plan. Verse 9 says that God has made the mystery of His plan known to us, and St. Paul argues that each marriage between man and woman helps to make God's greater plan visible. St. Paul even seems to understand that these words of his were going to be met with some degree of confusion when he says in verse 32, "This is a great mystery, and I mean in reference to Christ and the Church;" In other words, do not try to take your culture's understanding of marriage and apply it to the relationship between Christ and the Church. Rather, take what I'm teaching you about the relationship of Jesus Christ to the Church and the Church to Christ, and apply it to marriages.

What can we take from this? That terms like "marriage", "husband", and "wife", are not subjective terms open for interpretation or mutation by you or I or the New Jersey State Supreme Court. Marriage on earth was created by God to be an imitation of the self-gift between Christ the Bridegroom and His Bride, the Church (i.e.- you and I). It's meant to be a glimpse of the Communion of Persons that exists within the Holy Trinity. Is there any question that a "domestic partnership" doesn't quite clear that measure?

This marriage image is best seen at Mass. The phrase said by the Priest just before the reception of Holy Communion is actually a combination of two phrases. The first, "This is the Lamb of God who takes away the sins of the world.", is John 1:29, John the Baptist's exclamation as he sees Jesus approach the Jordan River for Baptism. The second part to that is "Happy are those who are called to his supper" which is a rather bad English translation of Revelation 19:9 -"Blessed are those who are invited to the marriage supper of the Lamb." At every Mass we're invited to a wedding feast. In fact, we're invited to a "wedding night": Christ, the Bridegroom, gives Himself in the Eucharist in a way open to supernatural life. The Church, a.k.a. the Bride (at this point it doesn't matter if you're a man or woman; you're the bride), takes the Bridegroom into her fertile self where that supernatural life can grow. Pretty hot, huh? St. Maximus the confessor said that "Sexual Intercourse is the cosmic liturgy." It is, in fact, in the context of marriage that husband and wife live the words mouthed by the Priest at Mass: "This is my body which is given for you." If that doesn't get electricity flowin' within you, all I can suggest is you go mess with a third rail.