Feast of St. Ignatius of Antioch 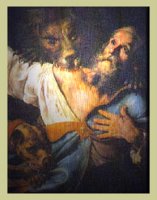 St. Ignatius (portrayed here artistically with the means of his demise) shows us the "Next Generation" in the Church. Tradition says he was the child held up by Christ in the midst of the apostles as he challenged them to "become like little children" to accept the Kingdom of God. Later on he'd become a disciple of the apostle St. John and Bishop of Antioch (a position previously held by St. Peter). In Iggy's 7 letters written on the way to his execution in Rome, we get a glimpse of what the Church already believed as little as 70 years after the Ascension of Jesus:

So what can "Young Fogey" Priests/seminarians learn from St. Iggy? That it's not all about us! We're not the "final, finished product." We're the latest link in a chain that goes back to Christ and his apostles. So we do our best to make sure that we, as a link in that chain, are not only firmly attached to the links behind us, but strong enough to support and sustain the links that will come after us. How many times in my life I let an opportunity to read or pray slip away in favor of a nap or something on TV? So if you're a seminarian reading this (and I suppose a Priest, too), put down the PlayStation or the TV remote, pick up a book, or go to the chapel. St. Ignatius wrote, "I am God's wheat and shall be ground by [the lions'] teeth so that I may become Christ's pure bread." In short, if you're feeling beat up, chewed up and spit out by your work, congratulations! you're doing it right. Keep up the good work.