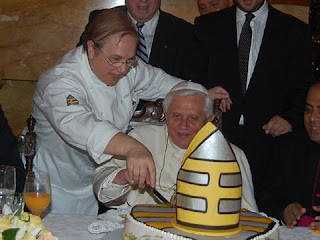 I've been interested in cooking since my seminary days. One of my favorite TV chefs is Lidia Bastianich, host of Lidia's Italy, which airs on public television.
During Pope Benedict's visit to the United States last year, Lidia was asked to prepare a meal for the Holy Father during his New York stay.
I bring this up because, in honor of the one year anniversary of Lidia's culinary achievement, her restaurant in Manhattan, Felidia, will cook you the same meal which the Holy Father dined upon.  The special costs $85 dollars per person (more if you let them pair the courses off with wines), and runs from April 14 - 30.
Posted by Father Jay Toborowsky at 4/08/2009

But do you get a papal mitre cake?

Who knows, maybe they do make a version of it and give you a slice. Maybe little tiara cupcakes?