The Trifecta in the Knestout family!

Now that the mad rush of Christmas is over, the clergy in the Archdiocese of Washington, DC, is getting ready for the Episcopal Ordination of Msgr. Barry Knestout.  He'll serve as an Auxiliary Bishop in the Archdiocese.
I first met him years ago in my seminary days, when he was secretary to James Cardinal Hickey.  The Cardinal had a love for the Mount, and would visit from time to time, almost always with the then-Father Knestout at the wheel (the fact that he is a Mount alumnus also meant he could probably drive up routes 270 and 15 blindfolded).
The greatest gift he ever gave me was when I was one of the house Masters of Ceremonies.  At the time, the seminary scheduled one MC for service each day.  The rector decided to have a Eucharistic Day on a day I had been scheduled to be the "MC of the day", and Cardinal Hickey was coming to celebrate Mass, lead Exposition and Adoration, take part in a Eucharistic procession, and then conclude with Vespers and Benediction.  I knew he had a secretary, so I wasn't in much of a panic (that didn't come until I found out the seminary visit from my diocese's vocations director would coincide with the Eucharistic Day), and I had enlisted the help of the other house MCs.  Then they arrived and I found out that he was letting me do it all.  What a blast that was!  Me MC-ing for a Cardinal!  Not only that, but a Cardinal who loved wearing all the trappings.  My interaction with Cardinal Hickey will be saved for another blog entry.
But back to the Bishop-Elect.
The Episcopal ordination of Msgr. Knestout will make for an interesting "trifecta" in the Church.  Knestout's father had been a Permanent Deacon before his death.  His brother, Mark, is also a Priest of the Washington Archdiocese.  It means the family will have had members in all grades of Holy Orders: Deacon, Priest, and now Bishop. Before some nit-picker writes me and says that both priests in the family had been ordained deacons, you know what I'm trying to get at. 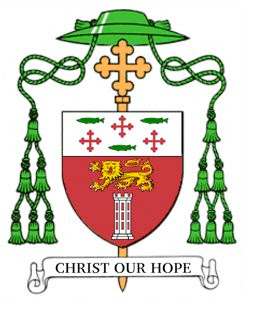 The new Bishop's coat of arms will reflect his ecclesial career: In the bottom part of the shield is both a lion from the coat of arms of Cardinal Hickey, as well as a tower from the coat of arms of Archbishop Donald Wuerl (for whom he has served in various positions and committees).   His episcopal motto was the theme of Pope Benedict's visit to the United States (a major part of which was his visit to Washington, DC), for which the bishop-elect was co-chair of the committee handling the arrangements.
Congratulations to another Mountie entering the College of Bishops!  I suppose we know who'll be the main celebrant of the homecoming Mass in '09.
Posted by Father Jay Toborowsky at 12/27/2008

I'd like to offer this story on my application that brings the prayer on iPhone.
I believe that prayer is Christian and Catholic from spreading. You wonder why you can publish the news and if you can spread it to your friends on the blog.

Sacred texts: Vatican embraces iTunes prayer book
5 days ago
VATICAN CITY (AP) — The Vatican is endorsing new technology that brings the book of daily prayers used by priests straight onto iPhones.
The Vatican's Pontifical Council for Social Communications is embracing the iBreviary, an iTunes application created by a technologically savvy Italian priest, the Rev. Paolo Padrini, and an Italian Web designer.
The application includes the Breviary prayer book — in Italian, English, Spanish, French and Latin and, in the near future, Portuguese and German. Another section includes the prayers of the daily Mass, and a third contains various other prayers.
After a free trial period in which the iBreviary was downloaded approximately 10,000 times in Italy, an official version was released earlier this month, Padrini said.
The application costs euro0.79 ($1.10), while upgrades will be free. Padrini's proceeds are going to charity.
Monsignor Paul Tighe, secretary of the Vatican's Pontifical Council for Social Communications, praised the new application Monday, saying the Church "is learning to use the new technologies primarily as a tool or as a mean of evangelizing, as a way of being able to share its own message with the world."
Pope Benedict XVI, a classical music lover who was reportedly given an iPod in 2006, has sought to reach out to young people through new media. During last summer's World Youth Day in Sydney, Australia, he sent out mobile phone text messages citing scripture to thousands of registered pilgrims — signed with the tagline "BXVI."