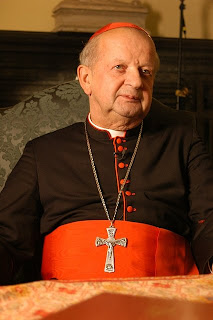 In the midst of the Synod going on in Rome, a press conference just began (12:30pm Rome time = 6:30am east coast time) to present a film based on the book, "Testimonal: A Life with Karol" by Pope John Paul's longtime private secretary, Stanisław Cardinal Dziwisz.
The film has a website where you can see a trailer.  Click HERE.
In fact, I just found this blurb from a Polish News Agency:

Pope Benedict XVI will be one of the guests of honour at the premier in the Vatican, October 16, of the film version of the best-selling 2007 memoir by Cardinal Stanislaw Dziwisz, retelling his experiences serving John Paul II over many decades.
Testimony tells the true story by JP II's long-time secretary, friend and closest witness to the most important events of his pontificate in documentary form, plus dramatic re-enactments of some of the most important events of his papacy.
The movie reveals details not told in the original memoir, including memories of Karol Wojtyła's childhood and youth. It also depicts previously unknown and poignant moments from the Pope's private life.
The film uses documentary materials and dramatized reconstructions of events to tell its story, including an in-depth interview with Cardinal Dziwisz himself. The whole film is tied together with a narration by British actor Michael York.
Directed by Pawel Pitera and produced by Przemysław Häuser, with an original score composed by Vangelis and Polish popular musician Robert Janson, Testimony will be released in Poland on October 17.
The date of the premiere at the Vatican, October 16, coincides with the 30th anniversary of Karol Wojtyla being elected to lead the Roman Catholic Church. He became Pope John Paul II at 17.17 CET, October 16, 1978.

My questions still is who's playing the Pope!? :)

From what I've seen in the trailer, first of all there's a few actors playing JP2 at different times of his life. But for the papal years, it looks like you'll only see the back of the Pope with Card. Dziwisz's voiceover explaining the situation. They keep mentioning the actor Michael York is in this, but I'm not sure in what capacity.

ah, right; I see. So, it seems it's more like a film of Cardinal Dziwisz' reminscences...?

From what I understand it's more of a documentary with some acted recreations rather than an feature film. (If you've seen the film based on George Weigel's Witness to Hope I suspect this will be similar). Michael York is apparently the narrator.