I got back last night from the annual Priests' Homecoming for Mount Saint Mary's Seminary.  In my ten years of priesthood, I think I've gone to seven of the ten homecomings.  They're always a great opportunity to "recharge the batteries", as well as visit towns from my past:  Emmitsburg, Gettysburg, and Thurmont.
Two things were different this time, both because of the fact that this was the 10th anniversary of ordination for me and my classmates.  The first thing was that seven of us from the Class of 1998 got together a day early for dinner at a rectory in the Diocese of Arlington, Virginia.  The homecoming is always nice, but there are just too many people there to have any meaningful conversation (usually it's literally, "Heyyyy!  How are you?  How've you been?  All going well? Great.  See ya.").  This dinner gave the seven of us a chance to hang out together before attending the homecoming, and it was a great idea.  What was it like?  Ever see the movie "Sleepers"?  Remember the end, after the trial was over, when the gang got together for dinner?  How they spent the whole night reminiscing about the past, before heading back to their lives?  That's all I could think about as we were sitting there.  We spent four years of our lives together, before heading in separate directions to begin our lives as parish Priests.  Ten years later, I treasure these guys. 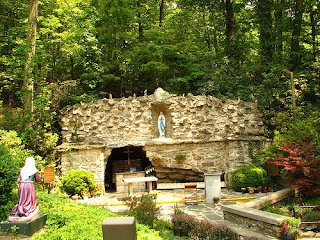 The second thing was that I was asked to preach at the alumni's Mass at the grotto, up above the Seminary.  Members of the 10 year class usually celebrate the Mass and preach the homily.  I received a phone call about two weeks ago from the seminary, asking me to preach.  An honor?  Yes.  But preaching in front of Mount alumni Priests, a seminary faculty with more degrees than a thermometer, and the most critical crowd ever: seminarians!  No pressure there, eh?
Some have asked me to post the homily, but I preach from notes that are in my own little system of "shorthand".  Let me write it out in a legible way, and then I'll post it.  The bottom line is that it was a great two days.  God is good.
Posted by Father Jay Toborowsky at 10/10/2008

I enjoyed reading about the homecoming and the 10 yr anniversary.

I am looking forward to reading your homily.

Thank you for sharing.