The first reading for Mass today had St. Paul telling the Ephesians (in fact, this is the last passage we'll get from Ephesians; tomorrow we start hearing Philippians at Mass) about the necessity for spiritual armor in our battle against evil.
The insight there is neat to catch.  Paul is on his way to Rome to appeal his death sentence imposed in Jerusalem (as a Roman citizen, this was his prerogative).  In today's reading, he writes that he is an "ambassador in chains"; he is literally chained (albeit a very long chain) to a Roman soldier as he's writing this letter.  We can imagine him occasionally glimpsing up from his parchment as he's writing about putting on "the armor of God", checking out what the guard is wearing, and giving each piece of the guard's protective gear a supernatural metaphor. 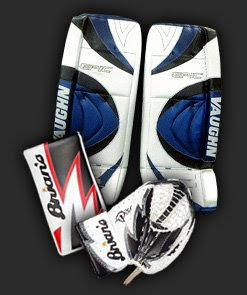 As someone who plays hockey, and more specifically someone who plays goal, there is something special about "putting on the armor".  Last night I went back to my old stomping grounds to play with the guys and gals I played with up until my transfer last July.  I hadn't played since late June, and so my equipment hadn't been out of its bag since that time.  I was dressing next to someone watching me put on the skates, pants, pads, etc., who was fascinated with the goalie equipment.  There's something about the equipment; a goalie "bonds" with his gear.  A goalie's gear is all that lies between his body, a hard ice surface, really sharp skate blades, and hard rubber pucks fired at various angles, heights, and speeds.
So what about Priests and their "spiritual armor"?  I'm talking here about the sacred vestments they wear for the celebration of Mass.  A Missal from 1959 gives a concise explanation of the vestments a Priest wears at Mass and their supernatural meaning:

The AMICE: A square of white linen wrapped around the neck and covering the shoulders.  The Amice symbolizes the helmet of salvation, i.e., the virtue of hope (1 Thess. 5, 8), that helps the priest to overcome the attacks of Satan.
The ALB: A long, white linen garment reaching to the feet. The Alb symbolizes the innocence and purity that should adorn the soul of the priest who ascends the altar.
The CINCTURE: The cord used as a belt to gird the Alb. It symbolizes the virtues of chastity and continence required of the priest.
The STOLE: Roman magistrates wore a long scarf when engaged in their official duties, just as our judges wear a court gown. Whenever a priest celebrates Mass or administers the Sacraments, he wears the Stole as a sign that he is occupied with an official priestly duty. When placing the Stole about his neck, in vesting for Mass, the priest begs God to give him the garment of immortality that was forfeited by our sinful first parents.
The CHASUBLE: The outer vestment put on over the others. Originally, this was a very full garment, shaped like a bell and reaching almost to the feet all the way round, though today they come in various shapes and cuts.  The Chasuble symbolizes the virtue of charity, and the yoke of unselfish service for the Lord, which the priest assumes at ordination.

What many people don't know is that there are prayers associated with the putting on of each of these vestments.  Why don't they know it?  Well, a few reasons.  In our day and age, when many people see Mass as some sort of performance, they creep into coming to think of the sacristy as "backstage" before the "show", where we kibbitz, wish each other luck, etc.  From the first time I entered the sacristy of St. Peter's Basilica, I have loved what is carved into the marble in big letters for everyone to see: The other reason is a "self-inflicted wound".  We clergy sometimes treat sacred vestments as ordinary pieces of clothing.   Many people don't know about the prayers the go with vesting because many priests (and deacons) don't USE the prayers when they put on the vestments proper to their office.  When Priests begin to think of the Mass as performance, then, for them, vestments become simply a "costume" they wear for their show.
Part of how we're going to restore the sense of the sacred at Mass is going to be showing those who are involved in serving in the various ministries that necessitate them being in the sacristy before a Mass (lectors, altar servers, extraordinary ministers of Holy Communion, cantors, etc.) that, when we prepare to celebrate Mass, there's stuff going on on BOTH the natural and supernatural levels.  Here I should also mention Canon 909, which says that "The priest is not to fail to make the required prayerful preparation for the celebration of the Eucharistic sacrifice or the thanksgiving to God upon its completion" (as if I needed something else to confess).  As when I play hockey, I need to get my body (by wearing all my armor) as well as my mind into the game, so in my Priestly service I need to prepare in both body (with my supernatural armor) and mind (with prayerful preparation).
So what if you're Joe or Jane Catholic who don't wear vestments?  For everyone else (and for clergy besides the vestments), what's the "armor"?  Prayer.  Confession.  The Eucharist.  In the Gospel today, Jesus laments the number of times that he's offered himself to the people of Jerusalem, only to be ignored or met with casual indifference.  From within how many Tabernacles does the Lord still get met with those same attitudes?  What does Jesus need to do to get our attention?
Posted by Father Jay Toborowsky at 10/30/2008

The careful observance of rubrics (and careful reading of exactly what's prescribed) is a 'defense' which protects the sacred nature of the Mass.

Would it be inappropriate for an altar server to repeat the prayers when putting on the alb and cincture? I've thought of teaching them to my son but I can't quite figure out whether that would be crossing a line.

Of course, I'm still trying to get him to tie the cincture the "right" way instead of in a double square knot, but I like to plan ahead...

I wish more priests could see the connections you have made here.
As a parent I know my kids see all I do and when they are disrespectful and I'm upset about it all I need to do is see where I must have reflected this in some way.
I can only hope more priests are spiritual Father's with such humility as you are showing...
Big Hug!