On Benedict and John 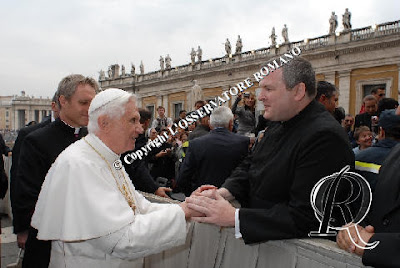 First and foremost, to quote Mahalia Jackson, "Oh, happy day!" At the Holy Father's General Audience yesterday, I was able to present him with a copy of "John Paul II for Dummies". I spent the night before rehearsing what I would say (or at least the first sentence or two), but then came the moment he's standing right in front of you and ((boom!)), I go blank. I have no idea what I said. Well, more precisly, I have no idea how what I said to him came out. But since the guards didn't pepper-spray me and the pictures turned out o.k., I must've done well.

On the downside, the cloudy day, the light rain, and the sweat from me being a "man of girth" walking much more than he's used to, meant that I spent the evening coughing and going through a box of Kleenex. So I'll just wait around today to find out whether, besides the book, I gave the Holy Father a cold.

Also, today is the feast of Pope Blessed John XXIII. This morning, his altar in St. Peter's Basilica was lit with extra candles and decorated with flowers. As I said in the last blog entry about St. John Leonardi, one of the great benefits of being in Rome is that you can visit the tombs of the Saints (or, in this case, the Blesseds).

Rome is also a place to practice your languages. The place where I'm staying has visitors from around the world. I've been sitting with two bishops, one from Haiti and the other from St. Lucia. Both speak English, though the bishop from Haiti's first language is French. Yesterday there was a lade from Jerusalem, and before her, two religious brothers from Argentina. This morning, two priests from Holland and two bishops from Brazil were at the table with me. Rome is amazing that way, in reminding you that the Church is not just your parish, or even your diocese.
Posted by Father Jay Toborowsky at 10/11/2007

Ah, but did you autograph the book you gave the Holy Father?

It's been a pleasure to read of your travels. Though this business trip, isn't as exciting, it is rewarding. It's great having the technology to keep up with your wanderings...wherever we go! God Bless You and thanks for your sharing your adventures. Hope you don't have our Holy Father sneezing tonight!
Mary