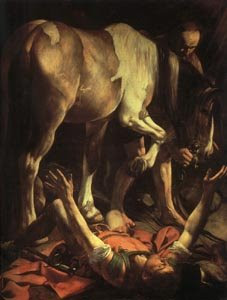 When today's feast day comes around, the first thing I think of is the famous painting by Caravaggio (pictured at right). I love Caravaggio's stuff. What's not to love? His use of light and dark, his realistic detail, and most especially the expressions on peoples' faces are amazing. This painting can be found in a side chapel to the left of the main altar at Rome's Santa Maria del Populo church, hanging across from another Caravaggio: The Crucifixion of St. Peter.


So today is all about conversion. What a pivotal moment in Christianity when St. Paul goes from obsessed persecutor to fierce defender! He was pivotal in my own entry into the Church. Back around 1990, I attended a day of recollection for those who were considering a vocation to the Priesthood, and part of the day included some quiet time in a church. To occupy the time, we were given a bible and a slip of paper with some biblical citations about vocations in general. The first quote I picked was out of Galatians 1 (which is also part of today's Office of Readings in the Liturgy of the Hours): "You have heard of my former life in Judaism, ... But when he who had set me apart before I was born, and had called me through his grace, was pleased to reveal his Son to me..." Like Paulie, I was 'knocked off of my horse' when I read those words.

day some former parishioners came to visit, and while we were talking one of them mentioned how her teenaged son told her that his friends consider her a bit of a "religious nut." Now, consider the source: A bunch of teens who will spend hours watching a football or basketball game, quoting obscure lines from Wil Farrell movies they've seen dozens of times, and willing to throw a fit in order to 'fit in' with the mob mentality that is high school. Why are a bunch of fans who go to a football game barechested in freezing weather called "diehards" and applauded, and a bunch of people who go to Washington to protest abortion in freezing weather called "religious nuts" and ridiculed?

Zeal after conversion may be intense, but it's also usually short-lived. Whether it's the zeal of being a new fan of a sporting team or a new convert to the Church in an RCIA program, many start off intense and willing to give of their time (to attend events) and cash (to buy the books, posters, window decals, etc.). But then what happens? The team plays badly. The Church (personified in the Bishop or a Priest, Deacon or Sister) disappoints them. Or, some other new and exciting thing comes along and captures their attention, drawing their time and treasure.

What if St. Paul's zeal had burned out early on? Would we be commemorating his conversion every year? What if he was 'on fire' for the first two years, but three years of preaching in Damascus got boring and he left? We remember St. Paul's conversion not just for that moment on the road to Damascus when Christ opened a can of whoopa$$ on him, but because it was the moment that affected every other moment for the rest of his life. His conversion is the overture of what's to follow. Think "Lexington & Concord". Think "Fort Sumter". Think of when you see on a screen "A long time ago in a galaxy far, far away...".

I've said it before: we're an "instant gratification" society that also suffers from attention deficit disorder. The Church doesn't need sprinters, she needs marathon runners. Sprinters can run 50 or 100 yards very quickly, but then they're exhausted and have to stop. Marathoners may not cover that distance as fast, but they'll keep going for miles and miles, despite distractions from the outside (weather) or from within (cramps). Let's ask the Lord to reveal Himself to us, and let's ask St. Paul to pray that we have the fortitude to do great things once it's happened.
Posted by Father Jay Toborowsky at 1/25/2007