Angelo Cardinal Scola has what's got to be one of the top five coolest titles in the Roman Catholic Church: Patriarch of Venice. I first heard of him in the seminary in the mid 90s, before his move to Venice, when he was Rector of the Pontifical Lateran University and the head of the John Paul II Institute for Studies on Marriage and Family. In our moral theology classes, we had begun to read his stuff, as well as the stuff of his predecessor at the JP2 Institute, Msgr. Carlo Caffara (currently the Cardinal Archbishop of Bologna, another not-too-shabby gig).

This past Wednesday, Cardinal Scola was at the United Nations to present the journal, Oasis, in the United States. The journal is geared towards Christians who live in predominantly Muslim countries, as well as nations that are experiencing ever increasing numbers of Muslim immigrants. I received an invitation to attend the event, which was a panel discussion on the topic of "Peoples and Religions." Joining Cardinal Scola on the panel were a Rabbi from the World Jewish Congress, a Muslim scholar from George Washington University, and Knights of Columbus Supreme Knight Carl Anderson (whose connection to Scola goes back to Anderson's days as Dean of the Washington, DC campus of the JP2 Institute). The event was put together by Crossroads New York Cultural Center, an outreach of the Communione e Liberazione movement.


What did I learn? Above all I realized how smart I'm not. As much as I like to think I'm doing what my seminary professors told me, continuing my education by reading current articles in magazines, journals, and newspapers, I'm not doing enough.

Anyway, here's some pictures that I snapped that night. Please forgive the blurriness. 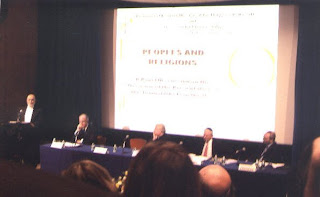 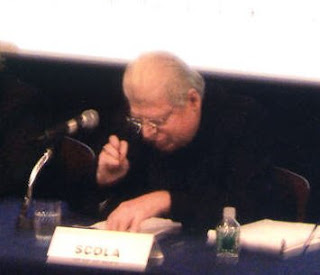