The chasuble worn by Pope Benedict at today's Mass for the Epiphany (still celebrated in Rome and elsewhere on January 6, and not transferred to a Sunday) should seem familiar to Young Fogeys. The gold chasuble embroidered with seashells was worn at B16's Mass of Installation following his election in April, 2005. The idea of wearing a vestment embroidered with shells is not unique to Pope Benedict (the National Geographic documentary, Inside the Vatican, shows a papal sacristan laying out a similar vestment for Pope John Paul II), but B16 has had a shell as a heraldic symbol in his coat of arms since he became a Bishop in 1977, so it took on a new poignancy that made the vestment famous. So famous, in fact, it was recently reproduced by the Basilica of the National Shrine of the Immaculate Conception, making its debut this past Christmas on Papal Nuncio Archbishop Pietro Sambi, and by all the Shrine Priests on Christmas Day.

But did the Holy Father ask for changes in the vestment? Here's a photo of B16 at his installation: 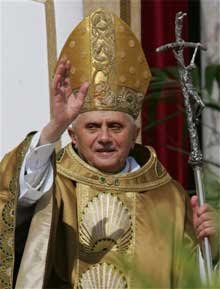 And here's a photo of B16 from this morning's Mass for the Epiphany: 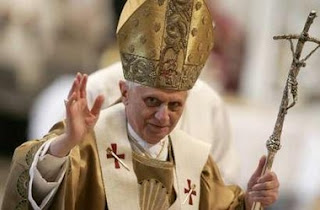 Where'd the roll-over collar go? Did the Holy Father's liturgical preference come out? The truth is that the man is known not only for his sweaters, but for his sweating. The roll-over probably made B16 'hot under the collar' (which is something you don't want in a pontiff).

I'll probably get in trouble for doing this, but I'll let you, my loyal readers, in on the big secret. When I put on my "Young Fogey Spy Glasses" and looked at the Pope's chasuble on TV, I could see written in big letters: "INDULT COMING SOON"! Yes, that's how he sends us secret messages. How can you get the spy glasses? It's a bit complicated (involving Proofs of Purchase from Ignatius Press and Gammarelli's over in Rome). Don't worry about it; I'll tell you what you need to know.