Ode to a Popover

The popover.  Did God make anything more perfect, more tasty, more scrumptious?  Outside, golden brown and a bit crusty.  Inside, soft, warm, hollow, ready to accept a slab of butter to soak into all that goodness.

The readings at Mass today reminded me of popovers.  The Queen of Sheba travels north because she has heard of this King named Solomon who is wise unlike anyone before him.  She brings with her loads of treasure, because even then there was "no such thing as a free lunch", and she expected to have to pay to have this wisdom all to herself.  When she gets there, she's impressed by the palace, the servants, the food, the tableware, even what the waiters wore.  But more than what she saw externally, was Solomon's wisdom.  "King Solomon explained everything she asked about, and there remained nothing hidden from him that he could not explain to her."  Like a popover, what came from inside Solomon was more impressive than all the bling outside.

Jesus in the Gospel today tells the people not to worry so much things of the outside world being "bad".  We shouldn't underestimate what he said today; it would have left Jews who heard it drop their jaws in disbelief.  "Whoa, no more bad foods?  The Maccabees died for these laws of clean and unclean animals; you're saying they don't matter?"  He changed it all: now uncleanliness is not about what goes into the body but what comes from a man's heart.  Again, the popover. 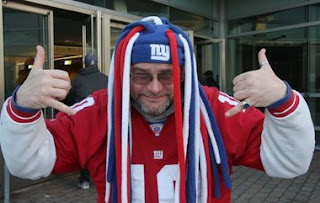 Fast forward to now.  Yesterday the Giants had their victory parade.  Along either side of the "Canyon of Heroes" and filling up MetLife Stadium were loads of people who, at least on the outside, looked like fans of the Giants.  But how many of them know the players' stats?  Or where they went to college?  Or who was the starting quarterback before Eli Manning?  I'm sure there were plenty of diehard fans at the events.  But I'd venture to say there were plenty of people there who looked good on the outside, but are pretty "hollow" on the inside.  Again, the popover.

Ash Wednesday is coming.  A day when every Catholic comes out of the woodwork to make sure they have a ash-drawn cross on their forehead.  But what's on the inside?  How will they spend Lent?  As the "People of God" or just as "Popovers of God"?
Posted by Father Jay Toborowsky at 2/08/2012

I just found your blog randomly by searching out Cardinal-Elect Timothy Dolan's motto To whom shall we go. I find that very amusing. I also find your blog to be very interesting and informative. Thank you for good works. I think I may become a regular reader of your blog even if you include Giants love in it. Sincerely Frank Travaline a Pats fan.

You made me hungry! But, not just for food for spriritual growth. Your blog has been a wonderful feast of food for the soul. God bless you, Father. We look forward to the blessed spiritual journey of Lent ahead with your insights...but during Lent don't mention too much good actual food, lest we give in and lose to temptation!