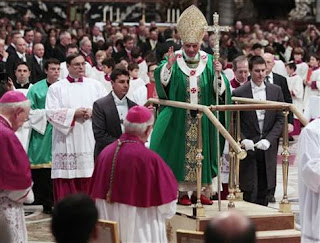 The big story at the opening Mass for the Synod on the New Evangelization was not the call for a "Year of Faith".  It was the fact that the Pope stood on the same moveable platform built for Pope John Paul II.  I think that makes it a 2nd Class relic, doesn't it?

A few things to remember here:

That came from all the chattering classes who didn't notice that the HF wasn't a spring chicken when he was elected. You think maybe someday they'll figure out he's not from Italy?