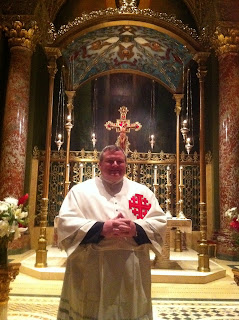 Do not adjust your computer screens, people, yes, that's me all dressed up.  This past weekend I was invested into [deep breath] The Equestrian Order of the Holy Sepulchre of Jerusalem, at a ceremony at St. Patrick's Cathedral in Manhattan.  No, I didn't have to get on a horse (I know PETA would've called that animal cruelty).  I'm in the mozzetta that Priest Knights wear: white with the Jerusalem Cross in red on the side.  This picture was taken at the Vigil Service the day before, held at the Church of Our Saviour, also in NYC.  Bishop Barres of Allentown presided at that Mass, in which we were "presented" with the mozzetta.  The investiture Mass was done by Archbishop O'Brien, former Abp. of Baltimore, New York native, and the Pro-Grand Master of the Order (the "Pro" gets removed when he is created a Cardinal, which is practically a "done deal" by being named to the office), in the presence of Abp. Dolan of New York, and a bunch of other prelates.  In the picture, I'm not yet wearing the actual decoration, which hangs on a black ribbon around the neck.  We received that after the Investiture Mass.

For more information about the order, click on this LINK from the Vatican website.
Posted by Father Jay Toborowsky at 10/03/2011

Congratulations, Father! Welcome to the Order!

Congratulations Fr Jay. We are very proud of you!!

Congratulations and God's blessings on you!

An appropriate quotation from Don Quixote: "God, Who provides for all, will not desert us; especially being engaged, as we are, in His service."