By now, I'm sure, you've seen the stories in the newspaper about the Flemington Department Store giving away pieces of the carpet used during the Holy Father's visit to New York.  Needing to buy new shoes, I decided to stop at the store (which is located in my diocese).
I received two pieces of carpet, one white and the other gold.  A paper you receive with the swatches explains that the white carpet was used around the altar at the Yankee Stadium Mass... 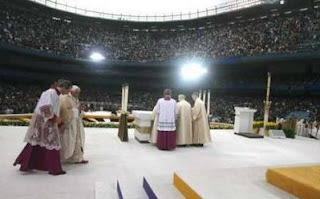 ...while the gold carpet (named "Pope Gold" by the manufacturer because it was especially made to match the gold chasuble worn by B16) was used both at the Dunwoodie youth rally, as well as Yankee Stadium, on the raised platform where Pope Benedict sat during Mass. 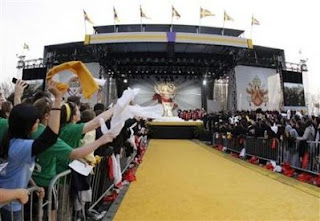 While there, I spoke to one of the employees, who saw my Roman collar and asked whether I was "there for the carpet".  He said the response from people since the story broke has been amazing, and the stories he told me reinforced the point.  One couple getting married in Florida wants to use it on a prie-dieu at their wedding, when they kneel for the Nuptual Blessing.  Another sent a piece to family members serving in Iraq and Afghanistan.  Someone came in to get a piece for a friend who has terminal cancer.  Me?  I almost felt guilty taking it simply because I'm a "Church Geek" who lives for pieces of history like this (but I took it anyway, hee-hee).
I'm told they have thousands of pieces available, all pre-cut into 9 inch squares (don't ask for enough to do your den), and if you send them a self addressed stamped big envelope, they'll be glad to send you some.  Here's their website with the address.
In the meantime, for those of you within driving distance of Flemington, Ted Resnick (the owner of the store, donated the carpet and paid for the labor to install it.  I think we Catholics should show our appreciation for his generosity by stopping in his store to buy something.  It's the least we can do for what he did to keep the Holy Father's shoes so clean.
Hey, they're Prada, right?  I think I read that on the internet someplace.
Posted by Father Jay Toborowsky at 5/06/2008

Thank you Father! I will send for one to give to my son. He, along with approximately 40 other seminarians from Texas were blessed with the opportunity to attend the Seminarian/Youth Rally at St. Joseph's Seminary. If you saw crowd shots you couldn't miss them in their cassocks and cowboy hats!

Thanks Fr. for writing about this. I've requested my piece. I haven't figured out if we're going to keep it or give it to my parish.