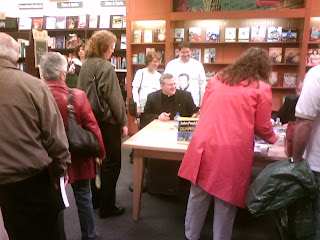 Another first in my life. Last night I took part in a book signing at a local Barnes & Noble for John Paul II for Dummies, along with the co-authors of the book, Fathers Ken Brighenti and John Trigilio. Lots of books were sold, and a good number of friends from my previous parish in Basking Ridge who drove down to the signing made it (in the words of Nat King Cole), "Unforgettable in every way." Thanks to a fellow blogger, Anthony at Jumping Without A Chute, for the picture. It was surreal! I mean, I'm the kind of guy who goes to book signings by other authors; I'm not the one who does the signing!

I know I've gone silent in the blogosphere, and I apologize to those of you who are good enough to take the time out of your day and your internet browsing time to click on my humble little blog. I know you've been disappointed lately with very few updates. Lent is a crazy time for Priests, and by the time we get close to Holy Week, I think I just got tired of having to think about what I could write that would be worth your looking at. So, I'm sorry I haven't been a better blogger. I'll try harder.

My first goal was, maybe, a little too ambitious, and that turned me off from writing altogether. With the release of Pope Benedict's Apostolic Letter on the Eucharist Sacramentum Caritatis, I was hoping to go through it on the blog a little at a time, with some commentary thrown in. But as happens when I've got a long list of "things to do", when I try to fight a war on multiple fronts I end up accomplishing very few things. So I'll try to better on that front, because it really is the latest installment in Vatican documents on the Eucharist which go back to the papacy of John Paul II (starting with JP2's "Ecclesia de Eucharistia", and, "Mane Nobiscum Domine", and the documents from Cardinal Arinze and the Congregation for Divine Worship "Redemptionis Sacramentum" and the suggestions and proposals for the 2004 Year of the Eucharist).

My responsibilities as Moderator (technically, that's my title with regards to the radio show, and I always like the sound of it, you know? I mean, Pat Zajak and Alex Trebec are "hosts", but the Sunday morning press show honchos: John McLaughlin, Tim Russert, et al, are "moderators") of the diocesan radio show means I have to come up with topics and book guests and then arrange a time to tape the show about 45 minutes away at our chancery. Don't get me wrong, it's fun and I love the work, but it takes time to do. Plus, this time of year the strategy is always to come up with a bunch of shows all at once, in order to have a surplus of new episodes all recorded and ready to go out. So that when Holy Week comes (and allowing for some down-time after the Lord Resurrects) I can focus on the happenings here at my parish.

Yeah, that's right: author, radio show host, and, oh yeah, parish Priest. Parish Priest. That's the most important one, and sadly, it's the one that often tends to get the short end of the stick. I'm ashamed to even tell you how my "Ash Wednesday" intentions to spend more time praying and exercising have gone. I keep imagining the debate that God the Father could have with my mother over which of them I pay less attention to. Ugh.

Now do you have an idea of why the blog went silent?
Posted by Father Jay Toborowsky at 3/30/2007