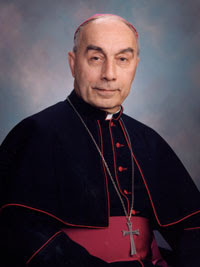 This past Thursday, retired Wilmington (Delaware) Bishop Michael Saltarelli passed away after a battle with cancer. I feel the need to tell you about my friend.
I was a college seminarian at Seton Hall back in the early 1990s, and by the time I arrived it was a "house job" that college seminarians served the 11am Mass each Sunday at Sacred Heart Cathedral (not yet a Basilica back then) in Newark. A good number of my friends were natives of south Jersey, and (since we were free on weekends) many of them spent the weekend in places like Deptford, Williamstown, and Bridgeton. Since I lived only about 25 minutes from the cathedral, I had no problem substituting for them on the serving schedule. I mean, how could you not absolutely love serving at a Mass in one of the true gems of ecclesial architecture, feasting your eyes on the stone and stained glass and your ears on the Cathedral choir that sang at the 11? As a result, I was at Sacred Heart for many 11am Sunday Masses, which was also the Mass that then-Rector Bishop Saltarelli usually celebrated.
It was a joy to serve at that Mass and especially to serve Mass for Bp. Saltarelli. He was always in a good mood, always friendly, always asking questions about how seminary life was going. In that huge cathedral sacristy, I watched him deal with many people, occasionally switching to Italian or Spanish in the process. Today's Gospel spoke about the rich young man who approaches Jesus, asking what he must do to inherit eternal life. I wondered, at one or two of my homilies this weekend, about how he had come to that moment, and opined whether it may have been the witness of a few of the apostles or disciples that led this man to approach Jesus to help satisfy the yearning he still felt in his soul. I told the Mass attendees that we'll never know what it was that he saw that got him to think, "Jesus has the answers I'm looking for!", and that we should never underestimate the power we have to bring others to Christ by our actions and words which are seen by people we don't even know are watching. Bishop Saltarelli was one of those "witnesses" whose character brought many to Jesus Christ.
After I graduated Seton Hall, we continued to keep in touch, whether I visited him during seminary breaks or by letters. In my years after ordination, we had lost contact, though I always tried to call him on his birthday. The last time I saw him was at the funeral of my bishop's mother. We exchanged pleasantries, and talked about me coming down for a visit. It never happened. Like John Lennon wrote, "Life is what happens when we're busy making other plans." Still, he was one of those guys whose example formed my understanding of Priesthood. A fatherly figure. A man of faith. An apostle.
May he rest in peace.
Posted by Father Jay Toborowsky at 10/11/2009

He was a friend of my husband's (from Nutley) family and my husband always had nice things to say about him. May he rest in peace.