Feast of St. Leo the Great

Today's Feast day always reminds me that Pope Leo's altar is one of my favorite altars to say Mass at St. Peter's Basilica.  Some of you may remember the blog entry I did a few months ago about the "nuts and bolts" of saying Mass at St. Peter's. 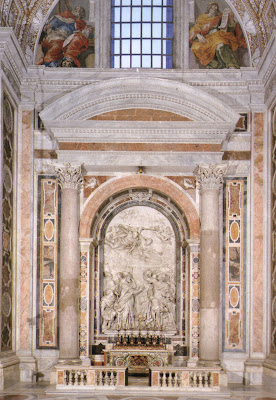 I like it for a few reasons:
Fogey Priests, when in Rome you need to say Mass at this altar (unless I'm there, then get out of my way!).
Posted by Father Jay Toborowsky at 11/10/2008

The very first time I ever said mass in St. Peter's this is the altar to which I was assigned. In my nervousness and excitement I hadn't even realized at which altar I was saying mass when I started. Halfway through mass before preparing the gifts I finally got around to looking at who was buried there and my heart skipped a beat! What a great privilege and just a really cool experience.

Offered holy Mass at that very altar in April: early morning, 0700, Saint Peter's as quiet as a church ;-)