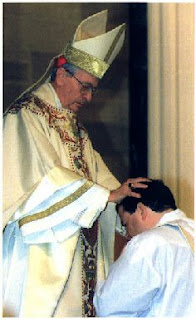 Nine years ago today, on May 30, 1998, I was ordained to the Priesthood. There's plenty of cliches out there such as, "Where did the time go?", and, "The time has flown by", but it is absolutely true. 3287 days? Amazing. I know nine years is hardly a significant milestone in the greater picture of things (my diocese has a retired Priest who was ordained in 1939 as well as a retired Bishop who is celebrating 60 years of Priesthood tomorrow!). After all, I've got T-shirts in my drawer that are older than 9 years! Still I'm grateful for the years God has given me so far.

This morning, today being a day of Ordinary Time, I was able to use the proper Mass prayers for a Priest on the anniversary of his ordination. For the readings, though, I used the readings of the day. I loved the Gospel today, which was Mark 10:32-45. Here's some parts of that passage:

"The disciples were on the way, going up to Jerusalem, and Jesus went ahead of them." Jesus led, and they followed. Easy enough, no? How many times Jesus has been walking ahead of me and all I have to do is keep my eyes on him, but something inside of me wants to break off and go another direction. How many times I thought I knew a shortcut or a better way of doing things!

"Taking the Twelve aside again, he began to tell them what was going to happen to him." Jesus never promised that every day would be perfect for his Priests. Today is also the seventh anniversary of my father's death. Two years to the day I became a spiritual father I lost my natural father. Joys, sorrows, moments of illumination, and glories. It's all there.

"Then James and John, the sons of Zebedee, came to Jesus and said to him, 'Teacher, we want you to do for us whatever we ask of you.'" In other words, "Jesus, I want this." How many times I've prefaced my prayers that way! Most times for very good and legitimate reasons, but sometimes with purely selfish intentions. Whatever happened to, "Thy will be done on earth as it is in heaven"?

For the Penitential Rite at the Mass, I used the invocations, "Lord Jesus, you raise us to new life", "...you forgive us our sins", and "...you feed us with your body and blood." In these nine years, I hope God is satisfied with how I've tried to raise His people to new life through my preaching and teaching, how I've counseled His people and forgiven their sins in Confession, and how I've fed His people through celebrating the Mass of the Roman Catholic Church.
Posted by Father Jay Toborowsky at 5/30/2007